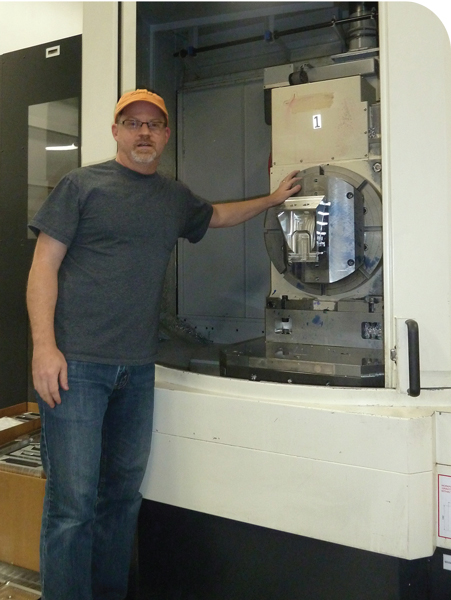 Machine programmers and operators know that valuable production time is lost due to unnecessarily long repositioning motions between cutting paths, unexpected collisions and over-travel. Detecting and correcting these problems historically has absorbed a great deal of the NC programmer’s time and attention as well, requiring code editing for days on end. However, software now is available that embeds simulations into the post processing phase, identifying the optimal tool path and automatically applying the results. Not only that, but the program can easily be transferred between different five-axis CNC machines and setups, making adjustments without assistance from the programmer. Jerry Gustafson, manager of NC programming at Valley Machine Shop, located in Kent, Washington, about 20 miles south of Seattle, has experienced this firsthand since adopting ICAM’s SmartPath toolpath optimization technology (patent pending). In fact, Valley was the sof tware company’s official beta tester during its development. “As a programmer, I’m now able to focus my energies on other things knowing that this software will run simulations during post processing and automatically apply its findings without the need for my involvement,” Mr. Gustafson says.

Founded in 1974 by Victor and Valerie Dalosto, Valley’s growth has followed that of advances made in industrial manufacturing, particularly aerospace, the company’s specialty. Now celebrating his 23rd year with the company, Mr. Gustafson has enjoyed a front-row seat to the introduction of machining processes and equipment that he wouldn’t have thought possible two decades ago. “The company’s first shop was on the Dalosto’s property, and then we moved into a slightly larger space,” he recalls. “But we were really small in the early days, and it was all about three-axis machining.” As orders grew from its primary aerospace customer, so did Valley. The company eventually moved into the spacious facility it currently occupies, lined with Mori Seiki turning machines; Mitsubishi, Mori Seiki, Makino and Haas machining centers; and no fewer than six five-axis machines from OEMs such as SNK, Haas and Makino. With such a robust lineup of metalworking equipment on hand, optimization began taking priority over physical growth. “We decided it was time to make sure we were getting the most out of what we already had,” Mr. Gustafson says. While seeking out snags in the company’s workflow, a central issue quickly surfaced. It involved the amount of time Mr. Gustafson, as programmer, was devoting to writing corrective code once post processing had been completed and simulations run—often with the added aggravation of being unable to obtain original post-processing programs for equipment that hadn’t been purchased directly from OEM dealers. Such problems quickly began chipping away at a machine’s value, from a production standpoint, because so much time was required to keep it running. That’s when Mr. Gustafson began researching post processing software development companies and the state of their latest technologies.

Some time before, Brian Francis, director of research and development at ICAM, which is headquartered in Sainte-Anne-de-Bellevue, Québec, Canada, had begun considering the possibility of developing a new technology, which eventually became known as post processing with integrated virtual machining (PPVM). While there was software available to identify toolpath problems, the simulations had to be run after post processing, and there was no automated means of connection between post processing and simulation; the programmer had to rewrite the code manually before it could be loaded into the CNC machine. Mr. Francis envisioned something that could not only predict— and therefore prevent—collisions and overtravel from happening in the first place, but also would automatically identify and apply the most productive tool path.

In 2011, Mr. Francis met Javad Barakchi, a mechanical engineering graduate student just beginning his postdoctoral work, and hired him to oversee the project that he’d had in mind for so long. “We decided to call it ‘SmartPath,’ since that really encompasses everything we wanted to achieve,” Mr. Francis says. Before beginning the project, Mr. Barakchi conducted a survey of the company’s existing clientele, asking what problems they were encountering and what solutions they’d like to have on hand. “The top two issues we identified were toolpath collisions and the machine axes overtravels,” he recalls. “Other problems included the amount of time that was being spent creating and editing CAM positioning paths, so we definitely felt that we were on the right track after hearing from the end users.” The first, and most time-consuming, aspect of addressing these issues was coming up with a “general solution” that would apply to all types of five-axis machining centers, making the technology “machine independent.” Another was to automate certain processes where the NC programmer had once been forced to step in.

Phil Masella is the Marketing & Communications Manager at ICAM Technologies. He can be contacted at phil@icam.com for additional information pertaining to this news release.
Phil Masella2017-02-01T13:38:58+00:00June 6th, 2014|Categories: Publications|