NC programmer Jerry Gustafson says he expected a learning curve when Valley Machine Shop decided to implement more sophisticated machinery. However, he had little inkling of the headaches and wasted time that would ensue from one issue in particular: obtaining working post-processors. Today, an integrated post-processing, simulation and control emulation system from ICAM (Sainte-Anne-de-Bellevue, Quebec, Canada) ensures not only that the post for any new machine will require little or no modification, but also that part programs will run correctly the first time.

Located in Kent, Washington, Valley Machine Shop has specialized in CNC milling and turning applications for more than 30 years. About a decade ago, the shop decided to specialize solely in aerospace work. Simpler jobs involving smaller parts, such as cutting extrusions and drilling holes for some of its aerospace customers, proved lucrative enough for a few years. By 2006, however, management had set its sights on larger, more complex work that would require more advanced equipment. Shortly thereafter, its range of three- and four-axis vertical machines began to give way to more sophisticated four- and five-axis models from Haas, SNK, Makino and Mori Seiki.

Ramping up on this new equipment was no small task, and post-processor challenges didn’t make it any easier, Mr. Gustafson says. The shop’s previous machines were simple enough that posts supplied by its local CAM software reseller required only minor syntax changes to work properly. However, the five-axis equipment introduced new layers of complexity. These machines’ expanded range of motion and sophisticated features proved a double-edged sword: They opened new possibilities for manufacturing, but those very possibilities made out-of-the-box posts less likely to properly translate CAM instructions into G-code for a specific machine.

For example, a generic post for a given machine typically won’t account for various control features that might differ from shop to shop- coordinate rotation, helical interpolation, high speed look-ahead, tool center-point control, and so on. CAM software doesn’t concern itself with such options because they are functions of the control itself. As a result, using a post that isn’t set up properly for a particular machine and CNC can result in the spindle moving to the wrong position, choppy motion leaving poor surface finish, and other such problems. At Valley Machine, these issues often left Mr. Gustafson spending hours and even days fine-tuning generic posts.

However, Mr. Gustafson’s expertise is in creating part programs, not dealing with the intricacies of five-axis post-processors. Therefore, the company determined his time would be better spent accordingly, and it searched the market for a solution. Mr. Gustafson says he and his colleagues knew they’d found one when ICAM responded to their query for a post with a 15-page questionnaire that aimed to determine the exact configuration of one of the shop’s new machines and how it was being used. “I was impressed with the knowledge they obviously already had and the information they were trying to collect,” Mr. Gustafson recalls. “I didn’t even have answers to most of their questions, so I had to call the machine builder.”

The shop soon purchased ICAM’s CAM-POST, a post-processing development, management and deployment tool designed to support virtually any CAD/CAM/PLM system, CNC and machine tool. For those inclined to create their own posts, the system features a wizard with illustrated sets of instructions for defining machine kinematics, travel limitations, offsets and so on. Valley Machine, however, uses the software only to install and update posts developed for its machines by ICAM engineers. Mr. Gustafson says he especially appreciates the fact that he can always make quick, direct contact with an ICAM engineer to work through any problems or confusion. 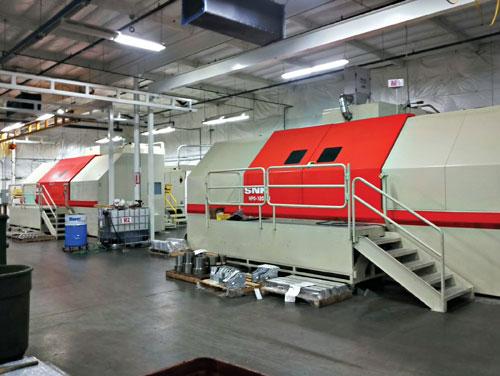 As Valley Machine set its sights on larger, more complex aerospace work, it began integrating more sophisticated equipment such as these five-axis SNK HPS120Bs. These machines were among the first of the shop’s five-axis equipment to use post-processors developed by ICAM. 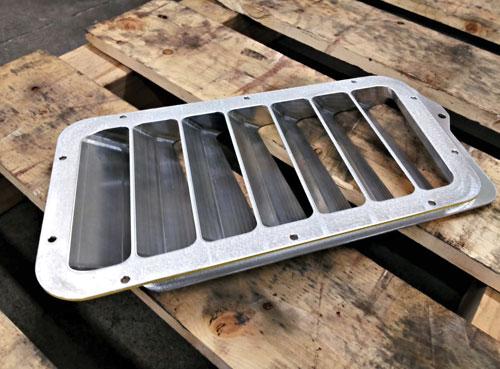 In recent years, Valley Machine Shop has moved from cutting extrusions and other relatively simple work to more complex parts that require five-axis machining operations. This exhaust component for an outboard nacelle strut is just one example. 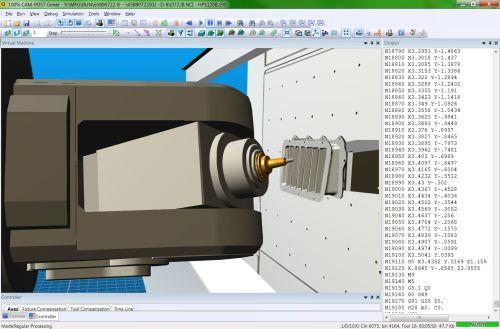 Another benefit of CAM-POST is that it integrates seamlessly with another ICAM offering: Virtual Machine, a verification system that enables programmers to graphically simulate and test programs during post-processing. The company had been on the lookout for a new verification system anyway, and integration with its new post-processor solution sealed the deal, Mr. Gustafson points out. “My post builder is also my simulation builder,” he notes. “So if something changes in the post, it also changes in the simulation.”

Prior to Virtual Machine, the company often used its CAM system’s internal simulation capability to verify programs. For simpler three- and four-axis programs, this was more than sufficient. However, five-axis machining of more complex parts is more likely to involve interference issues, dwell marks, undercuts and other factors that would not be reflected in an internal CAM simulation. That’s because the CAM program simulates only the tool path itself- the tool’s interaction with the material. “It helps while you’re programming, but as far as machine setup, for example, it won’t tell me if the spindle head is going to run through the middle of my part,” Mr. Gustafson says. In contrast, Virtual Machine works directly from the same NC code generated by the post, ensuring full representation of the machine’s kinematics.

Today, the shop uses ICAM’s Integrated PSE (Post-processing, Simulation, Emulation) system, which includes all the functionality of CAM-POST and Virtual Machine along with the company’s Control Emulator. Mr. Gustafson says the latter system makes Virtual Machine simulations more robust by accounting for control-specific functions like those mentioned above (tool center-point control, for example). Functionality for all of these systems is integrated directly within the company’s CAM software, he adds. That gives the systems full access to tools, holders, stock, parts, fixtures and other data stored in the CAM software.

In all, the package has provided substantial time savings, Mr. Gustafson says. He and other programmers no longer have to spend hours working through incomplete posts, while simulation capability ensures problems are detected before they reach the shop floor. Perhaps most importantly, the company can be more confident in moving to adopt new technologies. “Before, if I saw a new machine that we could really use, I might have thought, ‘That’d be nice, but the post would be a bear to work through,’” he says. “Now, it doesn’t matter. I know I’ve got support, both with the post and the simulation.”

Phil Masella is the Marketing & Communications Manager at ICAM Technologies. He can be contacted at phil@icam.com for additional information pertaining to this news release.
Phil Masella2017-02-20T16:27:52+00:00May 14th, 2012|Categories: News, Publications|